High fashion and archival artifacts collided in the most delightful way on Saturday, March 25th, at the Lord Baltimore Hotel, when the Maryland Historical Society held its long-awaited formal ball. Titled “Heirloom to Haute,” the gala brought together hundreds of well-turned-out Baltimoreans along with a display of garments from the MDHS’s enormous Costume Collection. Harboring over 6,000 articles of clothing from the 18th through the 20th centuries, the Costume Collection is one of Baltimore’s most well kept secrets.

But not, it’s hoped, for long. This fashion-themed gala was the precursor to a major fashion exhibition coming up in 2019. 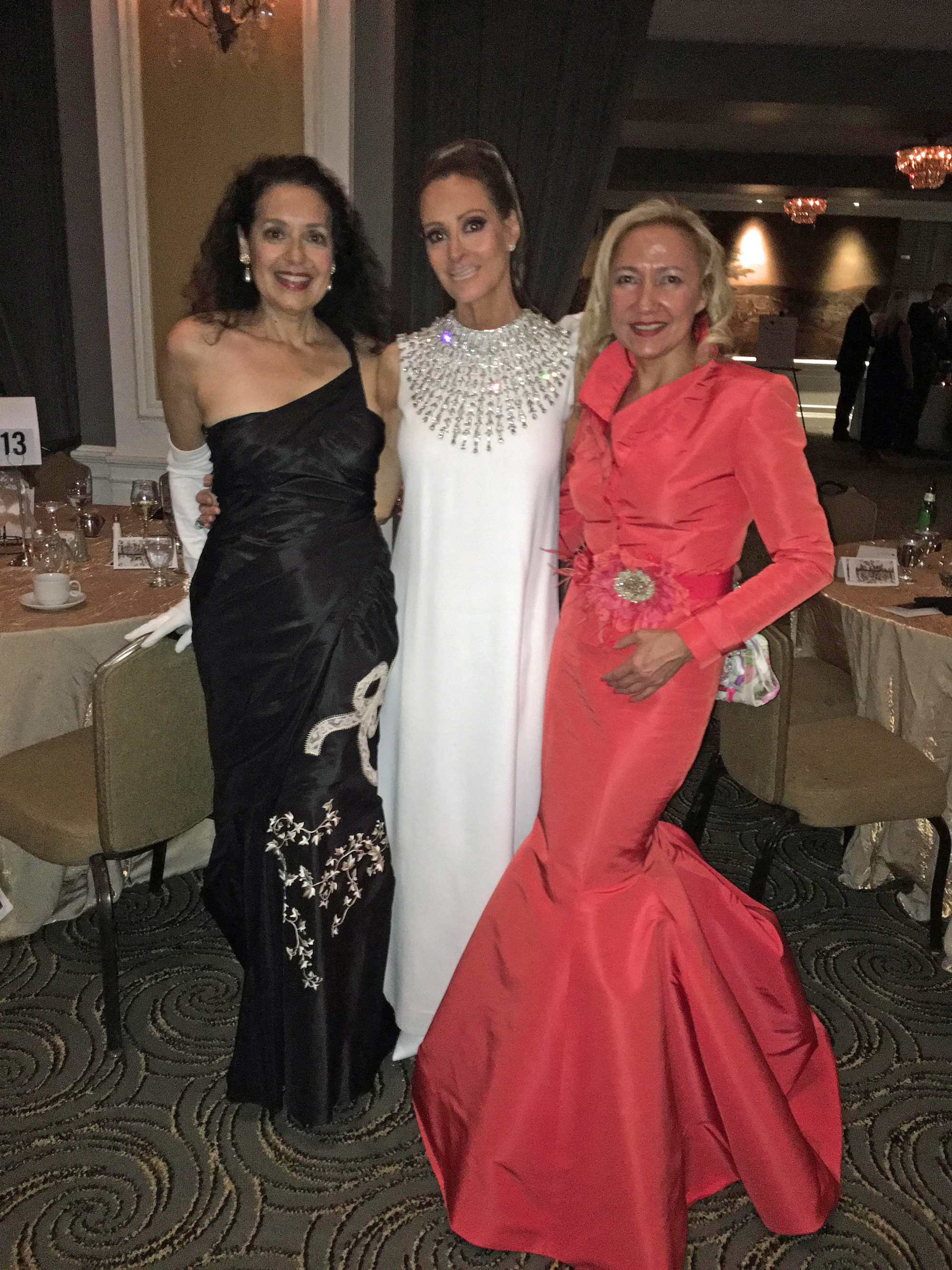 Two undisputed fashion queens of the city were also there – classic couturière Ella Pritsker of Ella Moda Designs and vintage collector extraordinaire Claire Hecht Miller. Ella (on the right) was wearing a brilliant coral gown that she, of course, designed and made herself, while Claire (in the middle) was wearing a 1970s ivory gown by Harvey Berin with a dazzling bejeweled bodice. That’s me in an original John Galliano (on the left). 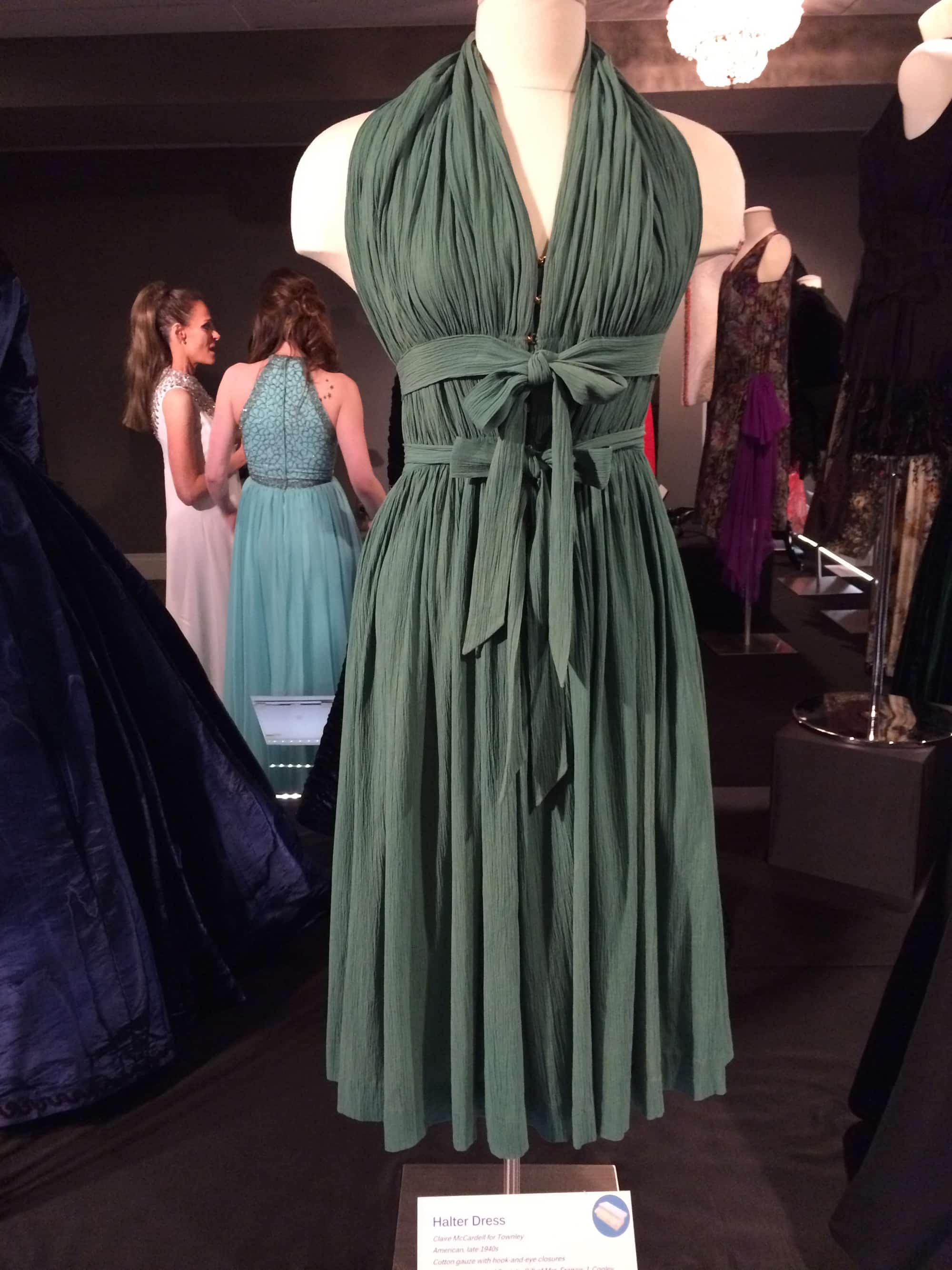 For this event, Ella also recreated several of the dresses in the MDHS Costume Collection, which recreations were raffled off throughout the evening. For instance, here’s a halter dress by Maryland’s own Claire McCardell from the 1950s, done in a green crinkle cotton. 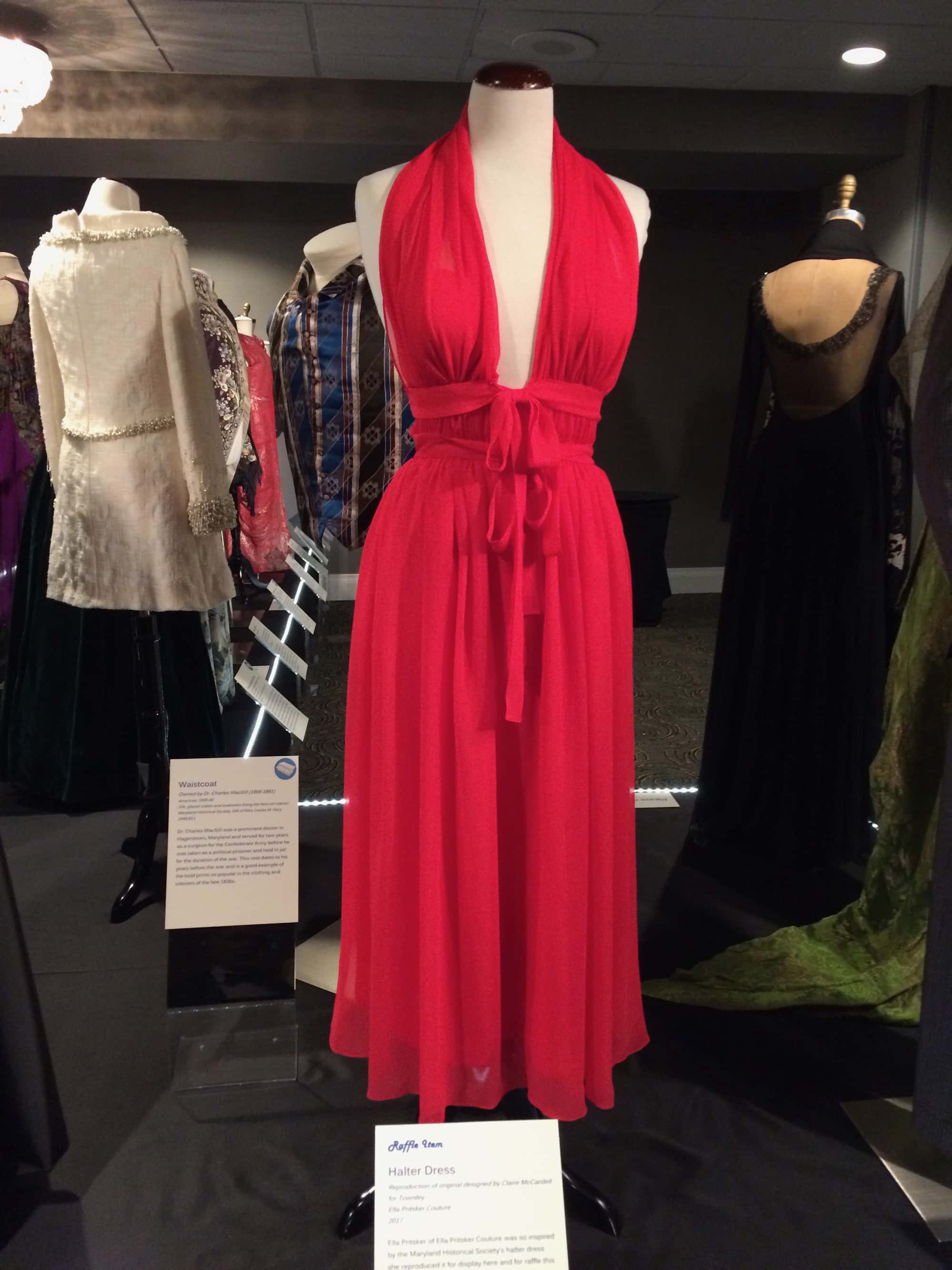 And here’s Ella’s version, done in a bright red silk chiffon. I don’t know who the winner of that was, but whoever she is, she sure is lucky! 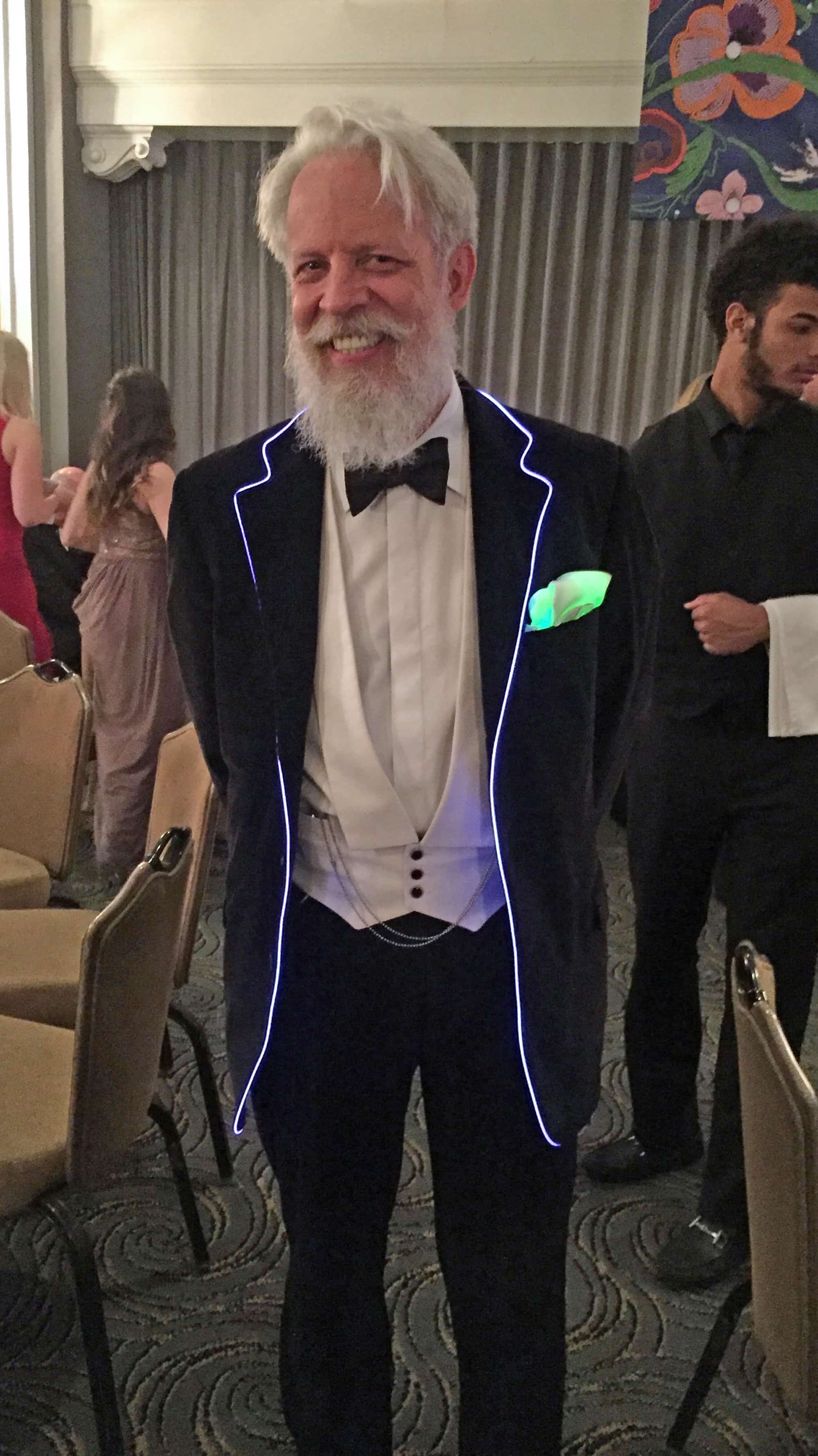 Lighting up the night in a fluorescent tuxedo jacket was antiquarian and bon vivant Mike Flanigan, familiar to many people from his appearances on the PBS series “Antiques Roadshow.” 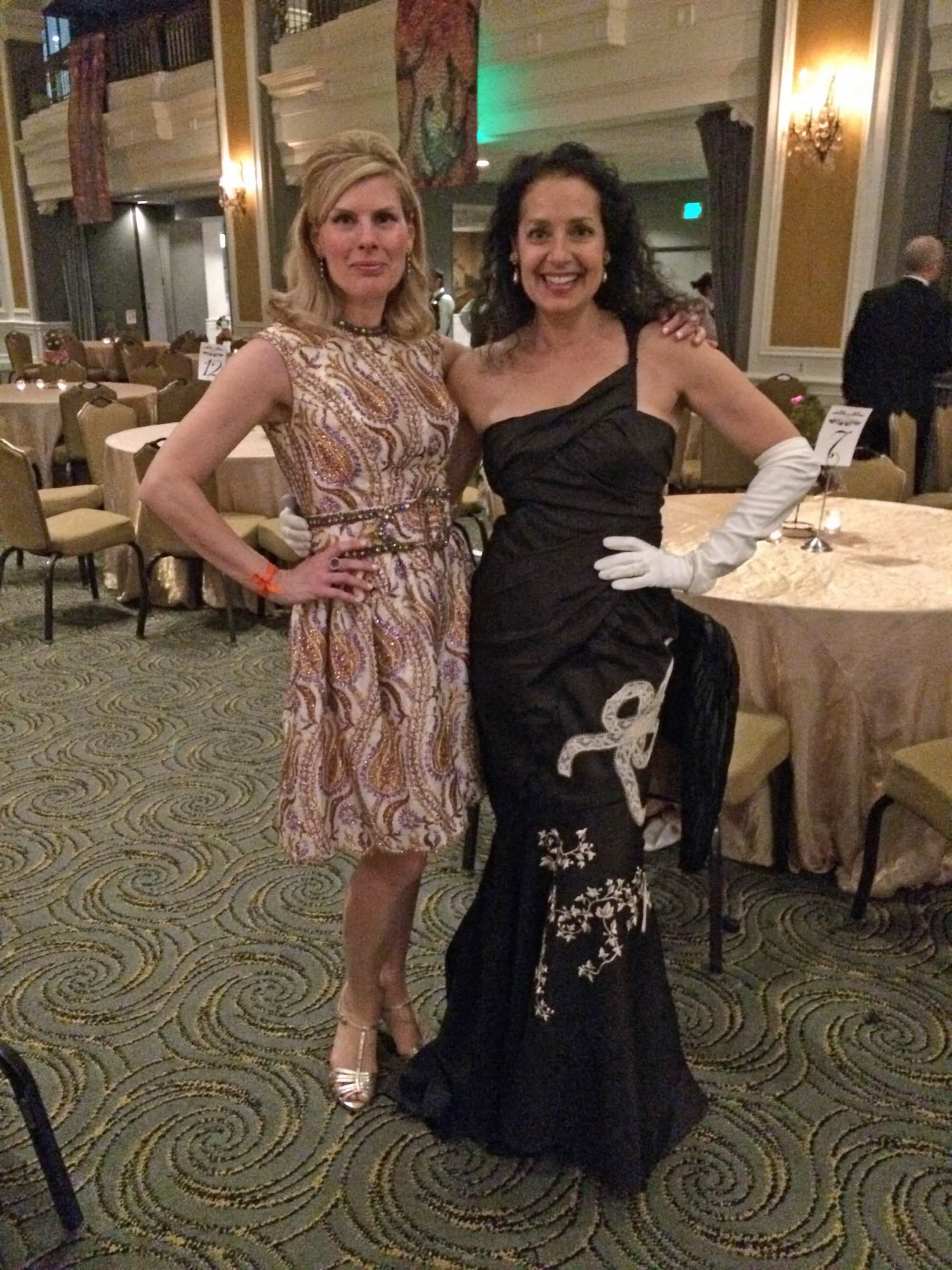 The brains behind the whole night was Alexandra Deutsch, Chief Curator of the Maryland Historical Society. She was wearing a glittering ‘60s frock that she changed into for the after-party. She had a whole different gown for the formal dinner, which you might have seen in Sloane’s “Scene & Heard” in The Baltimore Sun. 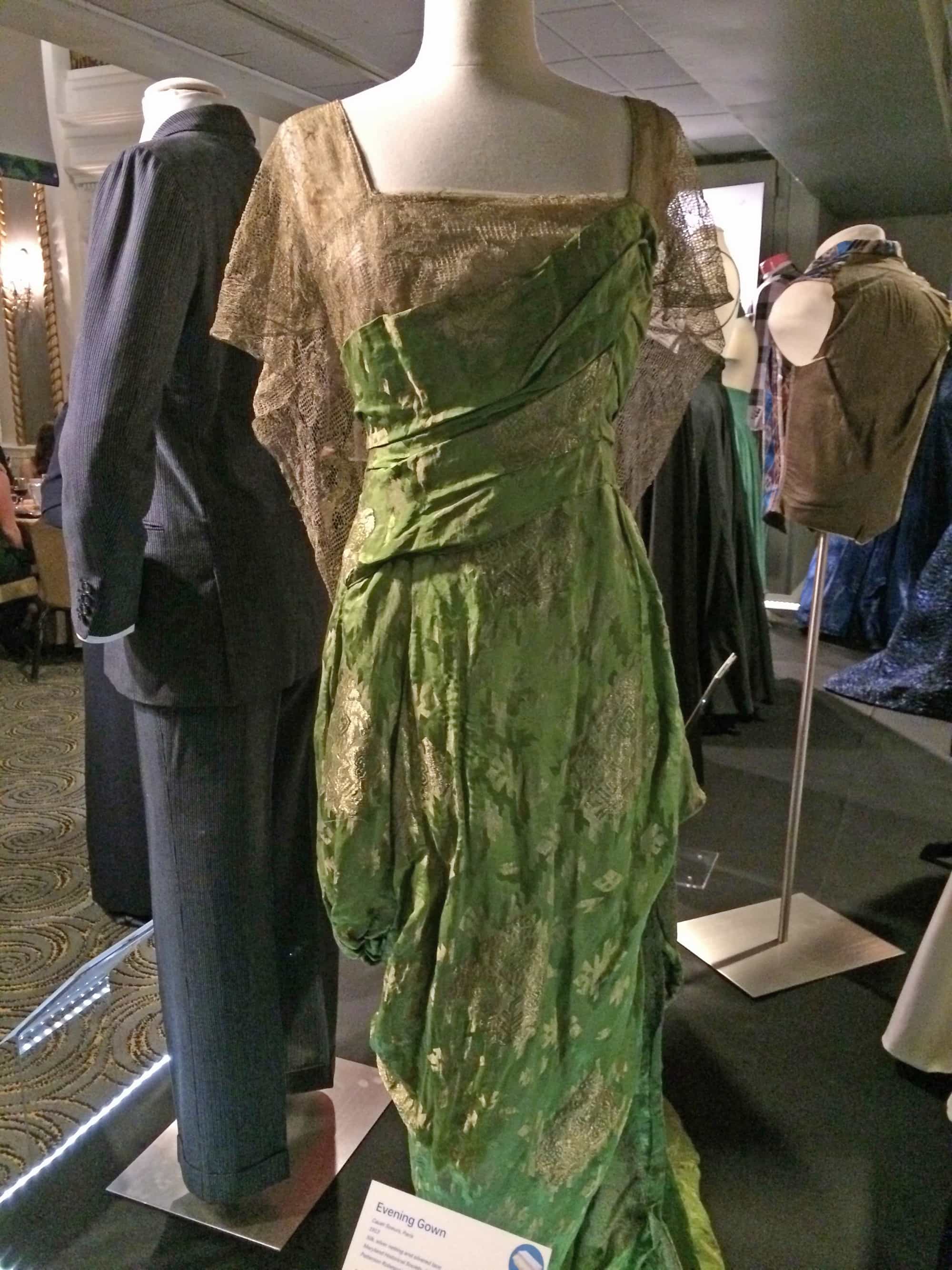 Here’s an Edwardian wonder from the early 1900s by Cauët Soeurs, in green silk and ecru lace, from the MDHS Costume Collection. 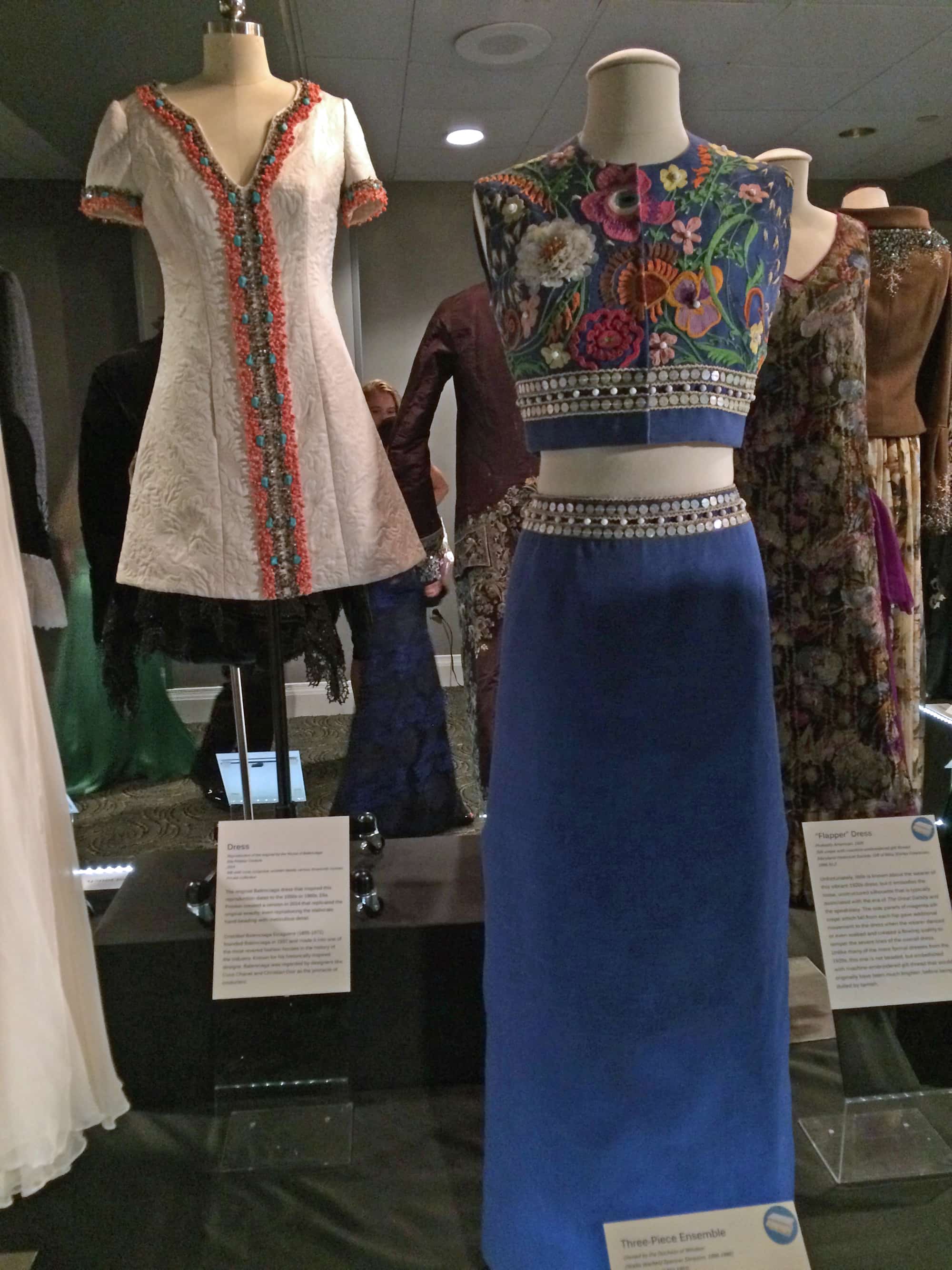 And side by side, two 1960s outfits: on the left, a white Balenciaga mini-dress with intricate coral beading that belongs to Claire Hecht Miller; on the right, a richly embroidered ensemble that belonged to Wallis Warfield Simpson, the Duchess of Windsor, that belongs to the MDHS. 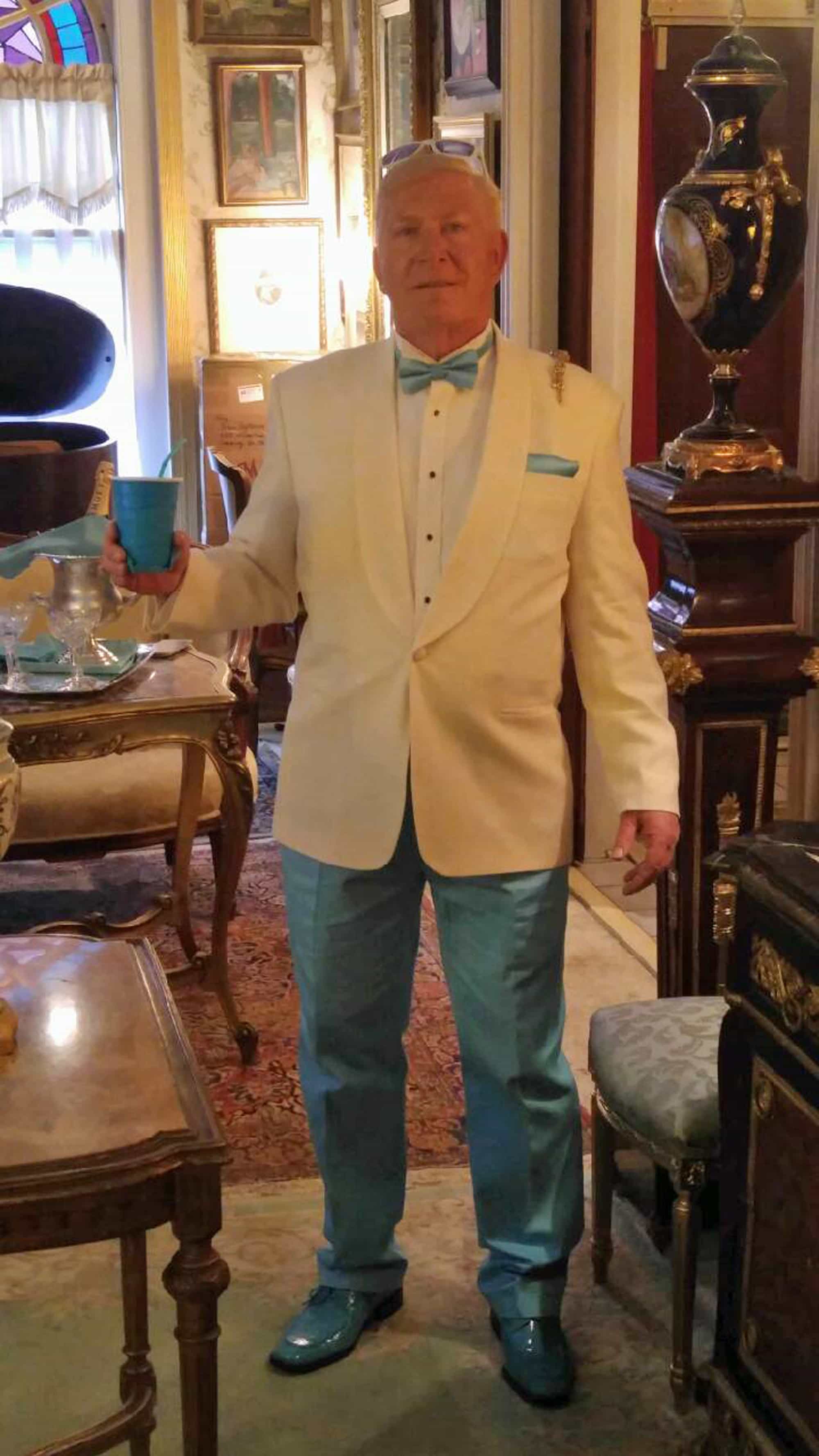 Speaking of the Duchess, the founder of the Duchess of Windsor Museum and one-man whirlwind Philip Baty was also at the party. And no ordinary tux would do for him. He was sporting a white jacket, with pants, shoes, pocket square, and bow tie all in the same shade of aqua-blue (to match his eyes, of course!). 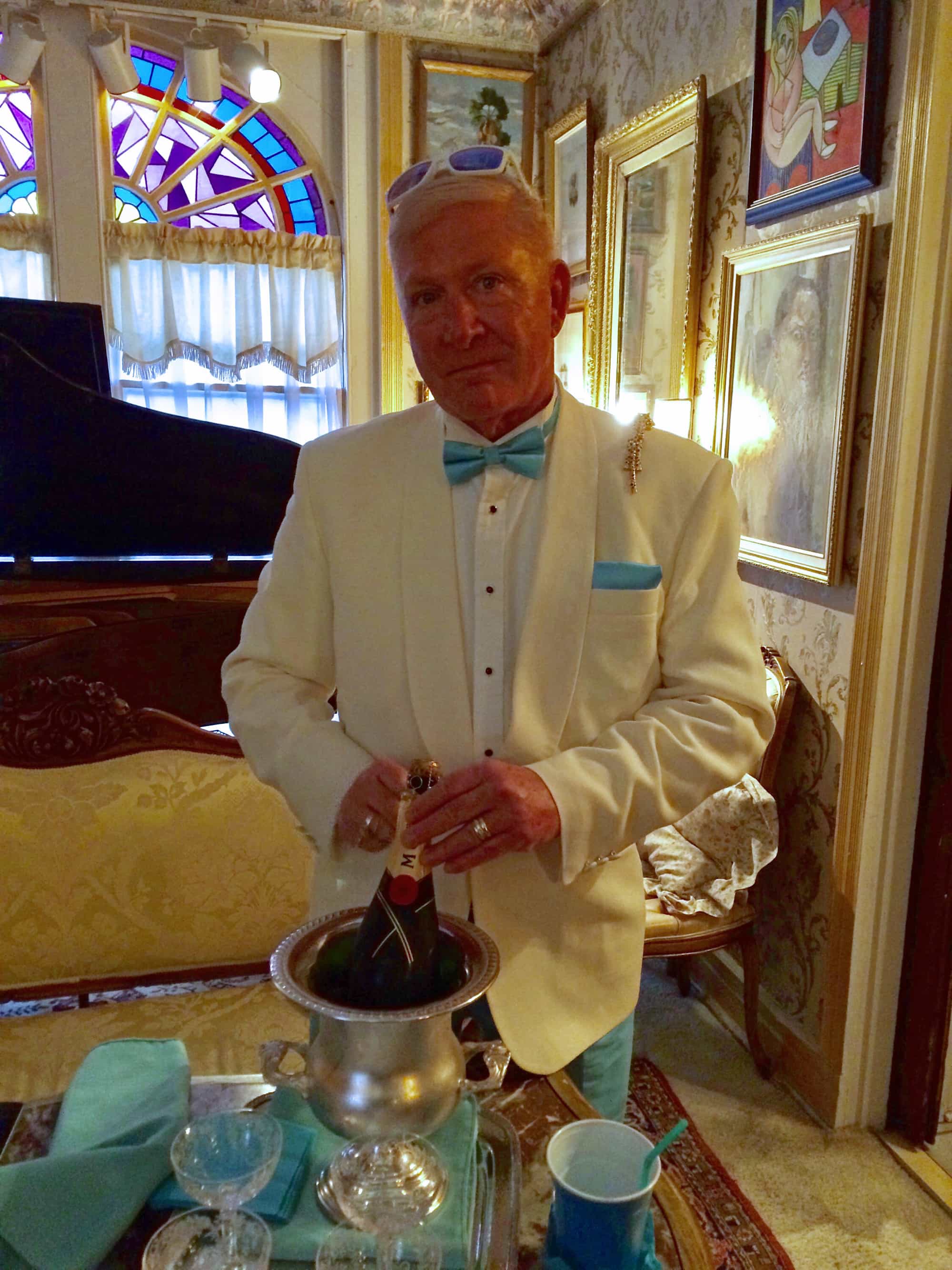 Here is he popping some pre-party champagne for us at his art-filled house in Mt. Vernon. 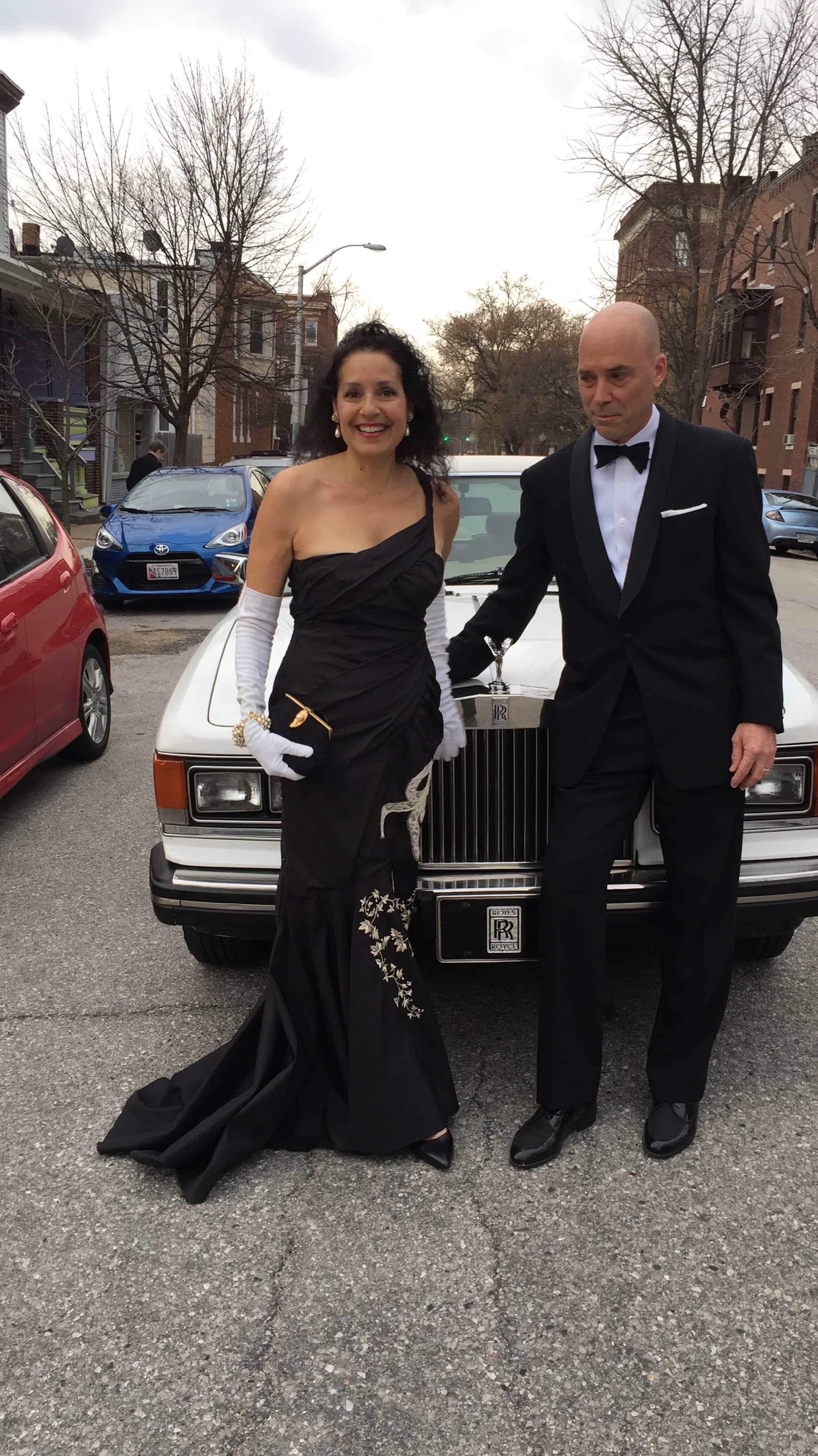 Earlier in the evening, Philip sent his Rolls Royce to pick us up at home and take us to the ball. I felt like Cinderella (which, as you can see, amused hubby no end). 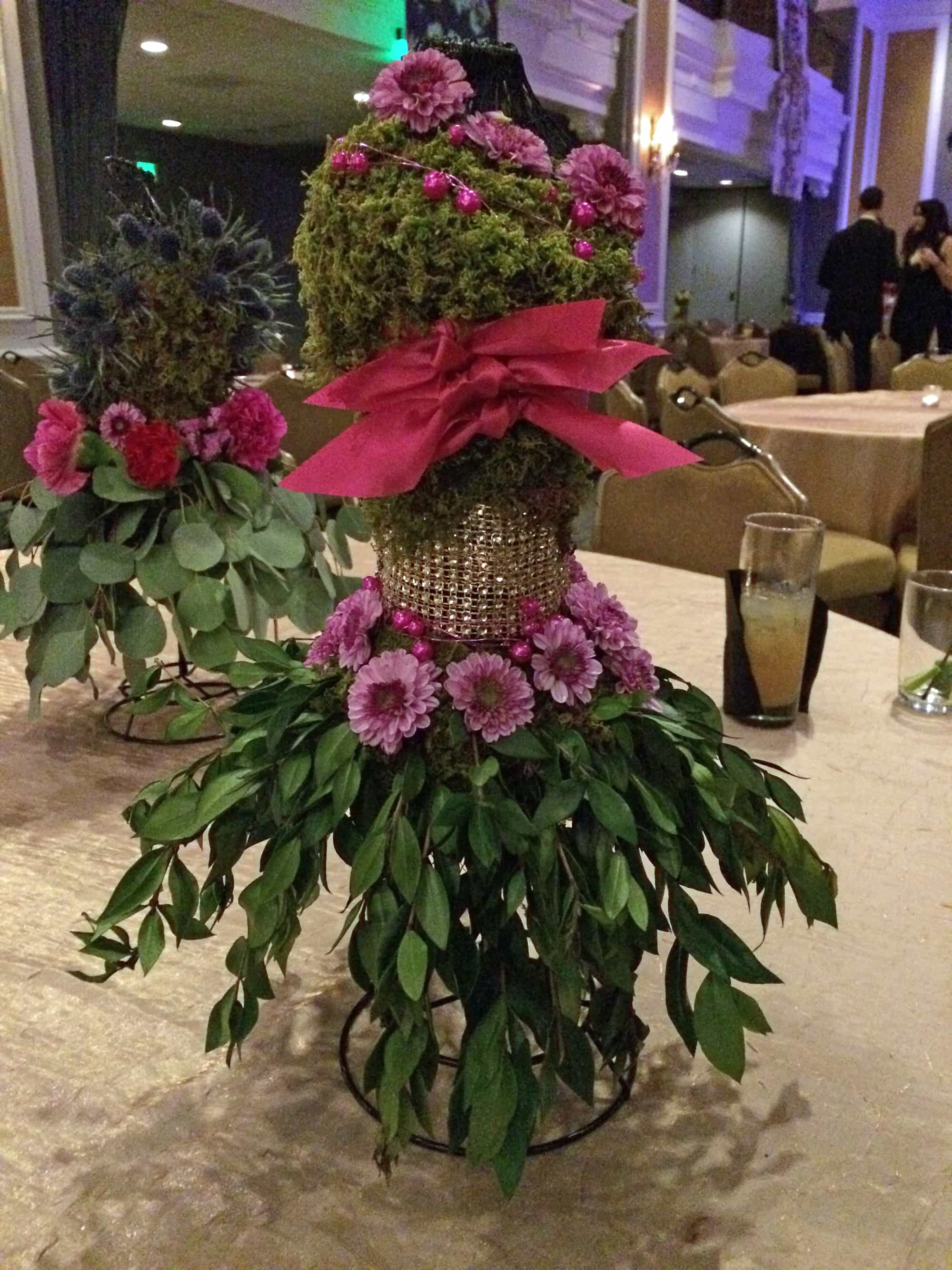 And here’s a parting shot, of one of the many different floral dress-forms that served as centerpieces for the dinner tables. The event was a smashing success from A to Z!