As we bid farewell to April, we look back at its capriciousness. Hot one moment, cold the next. After what seemed like an interminable winter, the sun and warmth of a possible spring gave hope. As quick as a Harry Potter magic wand, Baltimore’s iconic masters of street fashion sprung forward. Down puffys were abandoned to free shoulders, heavy socks gave way to sparkling toes, and short shorts gave legs their struttin’ stuff. Spirits soared as folks found it compelling to showcase a little color, to flash a little leg, to bare some skin. But as quickly as Mother nature warmed us, chilly airs rounded the bend and out came the jackets and tights. This time around – however – bright colors, shorter skirts and jaunty jackets, and white-white suits challenged Mama Nature to back off.  Warm weather, it’s a coming!!! Bring it!\ 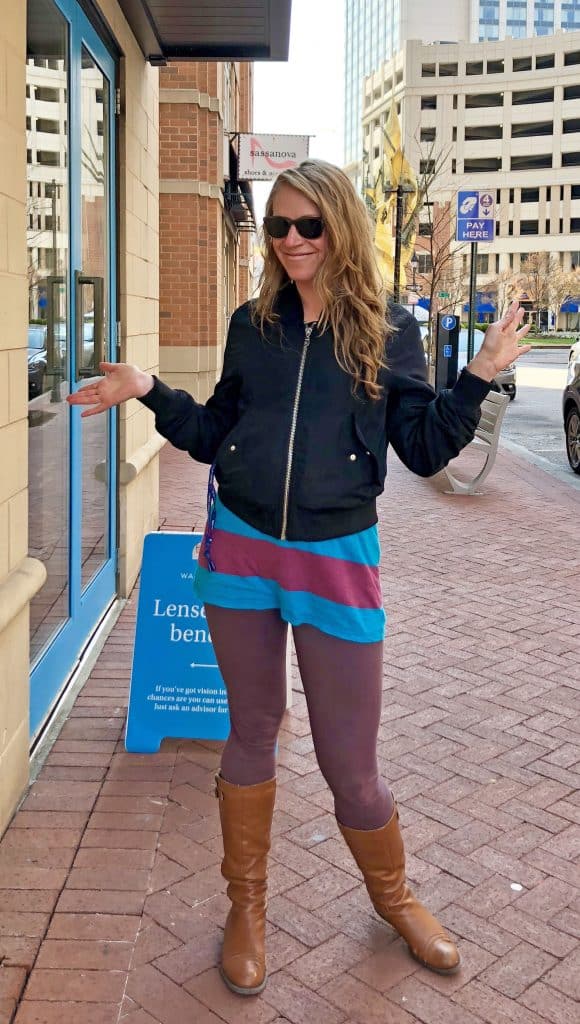 A splash of bright blue evokes the Caribbean above purple tights. Courtney heralds the beginning of spring. (Seen at Harbor East) 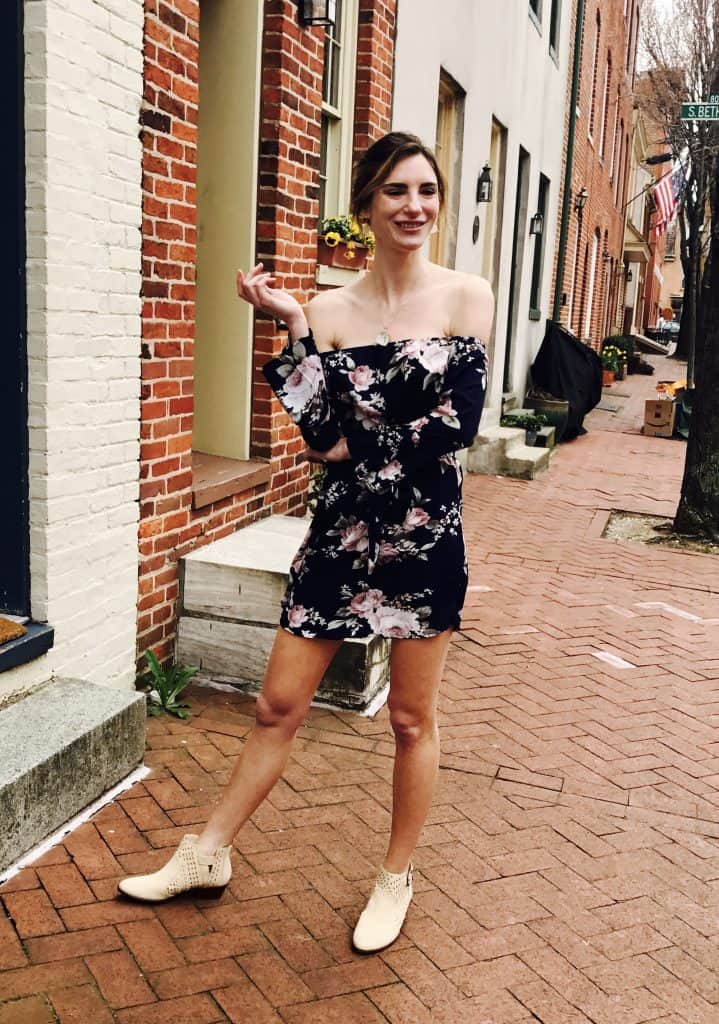 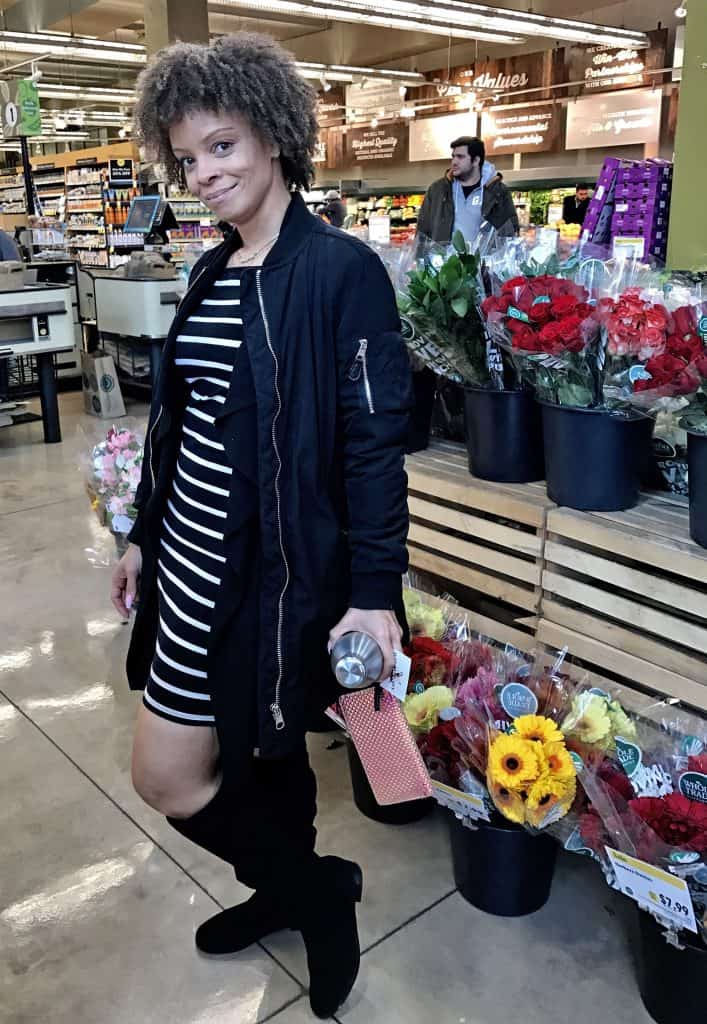 Shannon pairs a cool black and white striped shift with a warm black anorak. Against the flowers, it speaks spring. (Seen on Exeter Street)

An army green jacket for warmth, and a lovely lilac bag give Emily her Spring “armor” (Seen on Fleet Street) 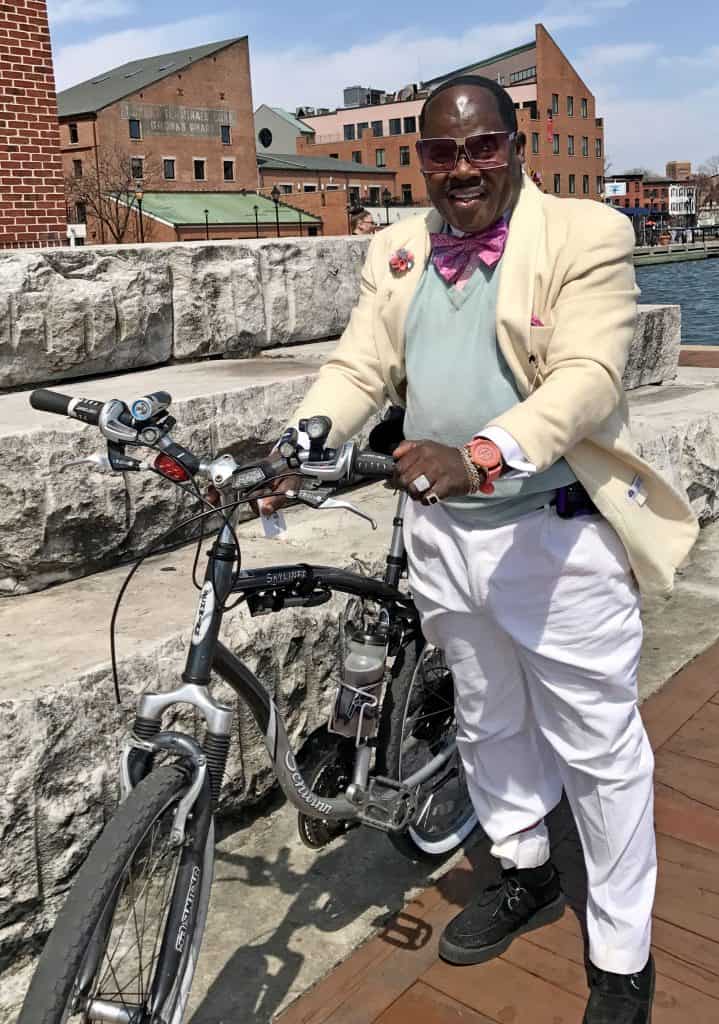 Okay, I am in love with this gent!!! Ralph’s white jacket and pants, flower pin in lapel, natty bow tie, and bike!! Where else but Baltimore??? (Seen at Fells Point harborside)

Who wears short shorts?? Apparently, Logan does, and does it well. Shades, shoulders, patterned tights – she’s got it all happening. (Seen on 36th street in Hampden) 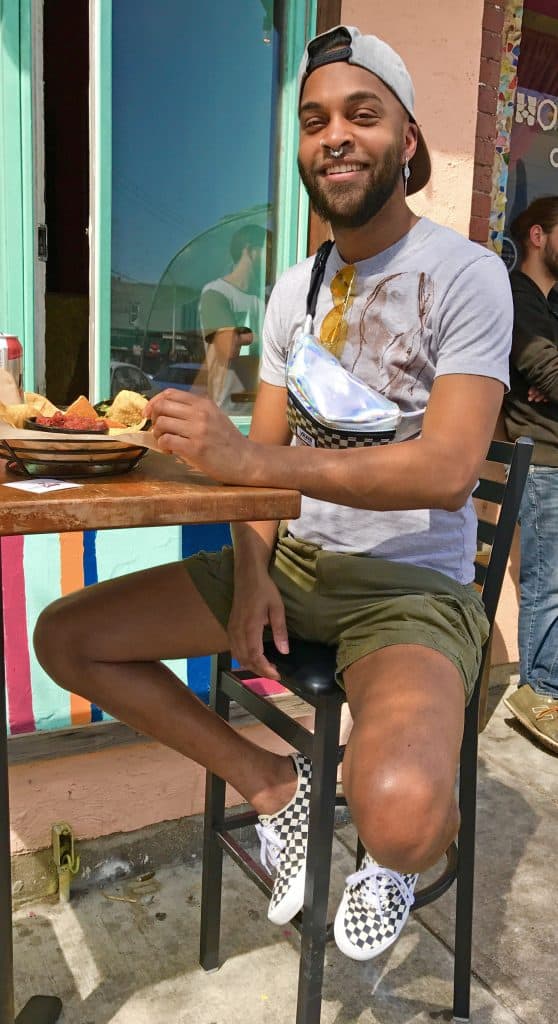 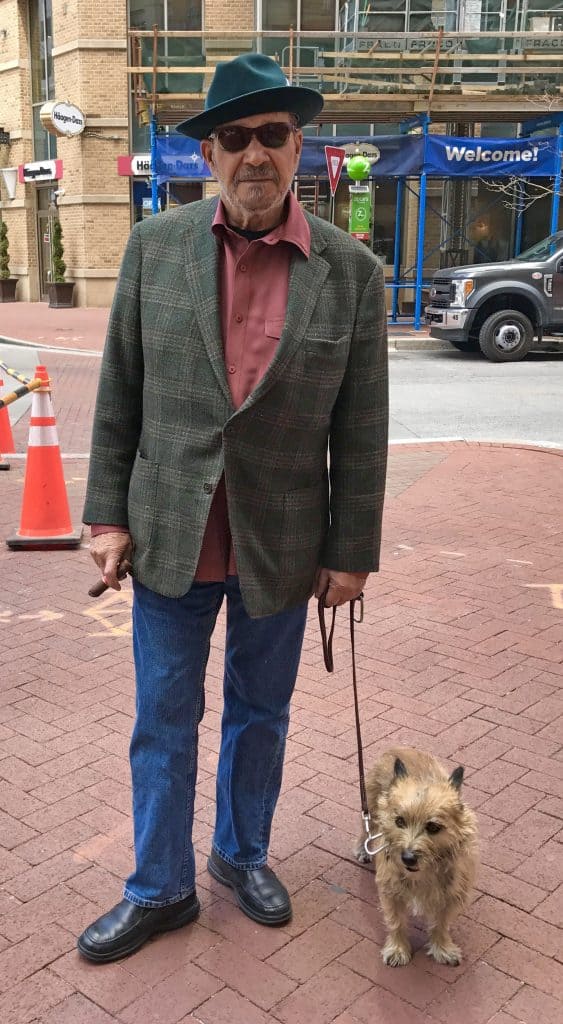 Did we transport to London? Dapper John in fedora, sportscoat, cigar and dog. What else? Tude, plenty of tude! (Seen at Harbor East) 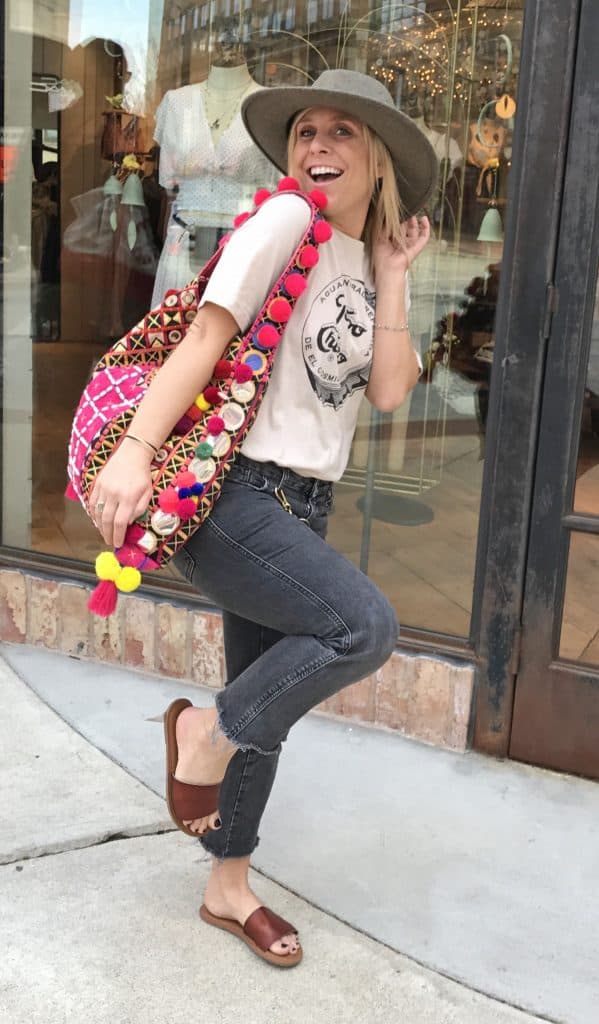 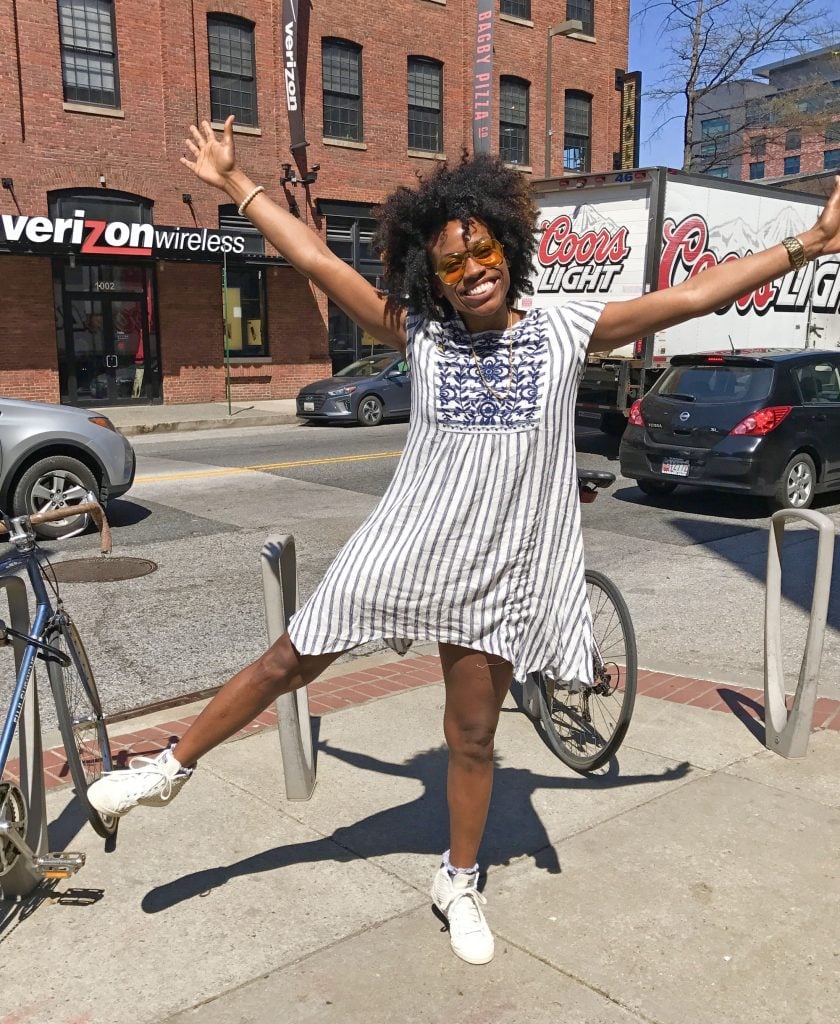 She’s the bomb. Coach B-Dot is her moniker. Joy is her spirit and fashion follows her game plan. Energy exudes. (Seen on Fleet Street) 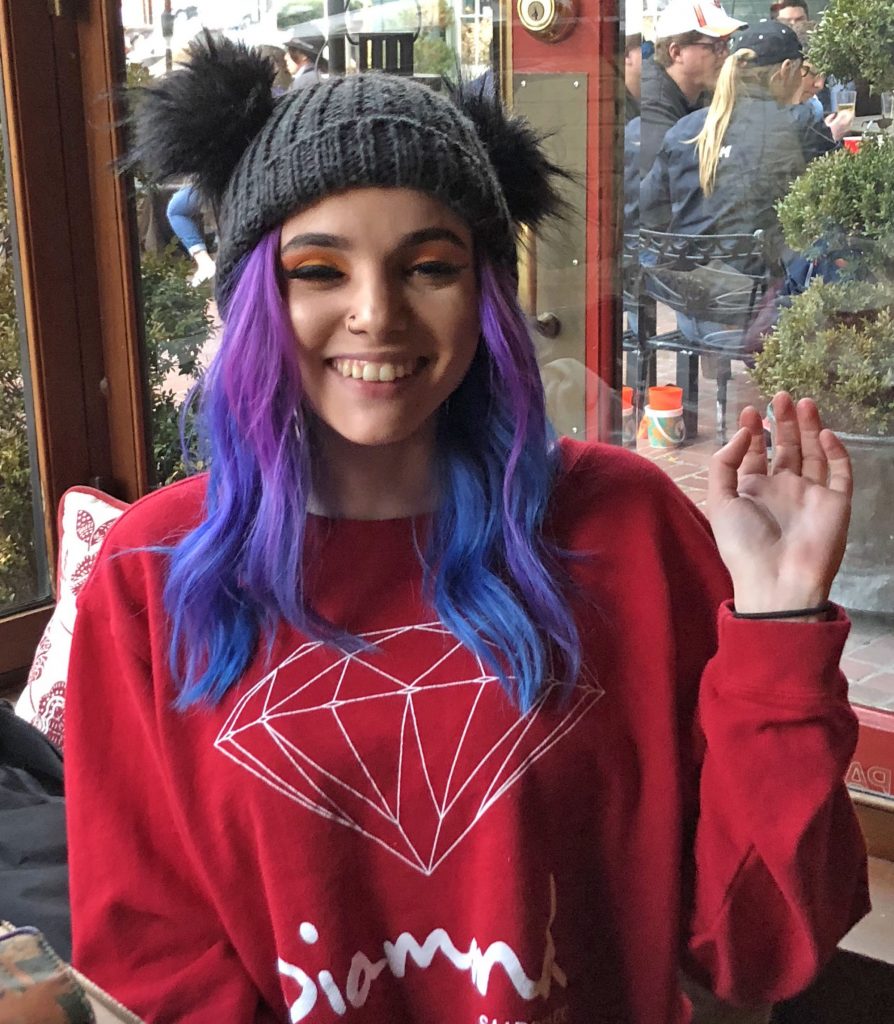 Cute doesn’t get any cuter! Pompom hat to ward off chills, but spirits soar with purple ombre hair and a sparkling smile. Buh-bye, winter. Spring is in the air!!
And that’s how we roll on the streets of Baltimore!